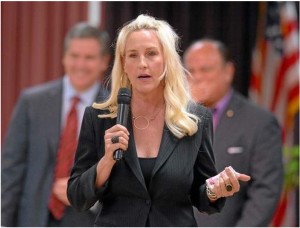 Activist Erin Brockovich speaks to residents concerned about their water quality in Gardena, CA on Thursday, April 30, 2015. Residents in Gardena, Lawndale and Hawthorne who get their water from Golden State Water Co. have been complaining about contaminated and sometimes black water coming out of their faucets. Brockovich came to speak to the residents and listen to their concerns. (Photo by Scott Varley, Daily Breeze

Standing before a crowd of about 200 people at the Gardena Elks Lodge on Thursday, environmental activist Erin Brockovich asked residents to raise their hands if they’ve seen black, brown, yellow or foul-smelling water come out of their faucets. Almost every hand shot into the air.

When complaints escalated earlier this year, Golden State Water Co. officials told residents the water did not pose a health risk and suggested it was consistent with corroding pipes.

Erin Brockovich and Robert Bowcock, a former water utility manager, have been looking into the issue for the past few months and met with U.S. Rep. Maxine Waters’ office in Washington, D.C..

Bowcock said he suspects the cause of the dirty water is poor maintenance of plumbing and a chemical reaction created by the blending of water from different sources. “Because of that, combined with their failure to maintain, (Golden State Water) created a lose-lose situation,” he said. “We’re not disputing that we don’t live in a perfect world and these things happen, but standing in front of consumers and lying and telling them the water is OK is just not acceptable.”